The Beurs van Berlage is located in the center of Amsterdam on Damrak, Oude Brugsteeg and Beursstraat, directly opposite the central station, a short distance from highways and Schiphol Airport. The Beurs van Berlage is extremely easy to reach, both by public transport and by private transport. The Central Station is a stone’s throw away and in the vicinity of the Beurs there are a number of large parking garages such as Q-park de Bijenkorf and Parking Centrum Oosterdok.

Due to the many road works in the city center, the approach routes to the Beurs van Berlage are constantly changing. We recommend you to consult the website of the Municipality of Amsterdam if you want to drive into the city center by car.

Amsterdam Conference Centre Beurs van Berlage is located in the centre of Amsterdam, on the Damrak, Oude Brugsteeg and Beursstraat, directly facing Amsterdam Central Station, at a short distance of highways and Schiphol airport. The Damrak forms part of a route that gives a visitor to the city a first impression, after leaving the central station. This route, which is called ‘the Red Carpet’, goes from the Central Station along the Rokin, the Muntplein, the Vijzelstraat/-gracht to the Weteringcircuit.

From Amsterdam Schiphol Airport, you can reach Amsterdam Conference Centre Beurs van Berlage by train or taxi. If you are travelling by train, you can buy a ticket to Amsterdam Centraal Station in the Arrivals Hall of Schiphol. The trains leave four times every hour and the journey takes about fifteen minutes. If you take a taxi, you can state “Beurs van Berlage” as your destination. The address is: Damrak 243. The drive takes about twenty-five minutes.

When you arrive at Amsterdam Centraal Station by train or by tram, Beurs van Berlage is 300 metres away, about a five minute walk. You can see Beurs van Berlage on the Damrak in front of you when you leave the Central Station along the Stationsplein (Station square) and head out towards the Dam from there.

For an up-to-date timetable, go to www.gvb.nl 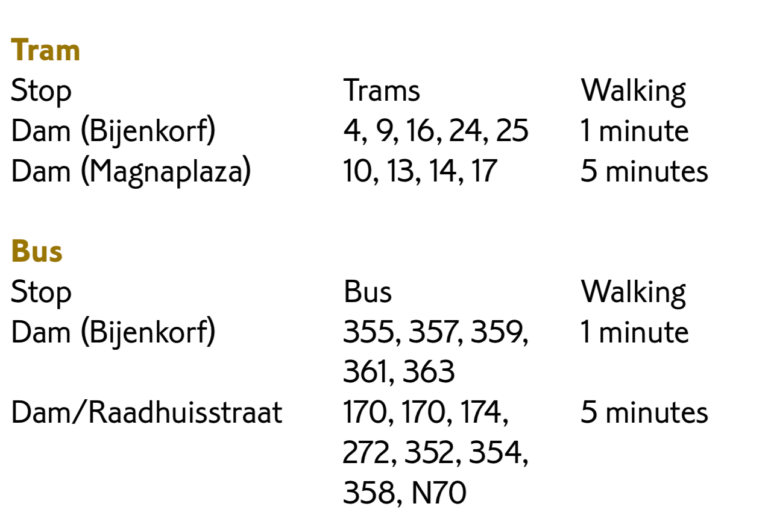 There are taxi stops right next to Beurs van Berlage, at the Oudebrugsteeg. You can order a cab at the Taxi Centrale Amsterdam, 020 – 777 77 77.